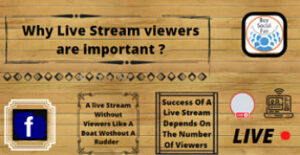 Live Stream
Live streaming is one of the hotlisted topics. Live streaming is a process of data transmission through the internet in real-time. Facebook and YouTube is the most known website for live streaming. According to Nielsen’s U.S. Video 360 Report 2018, 42% of the total population of the U.S have live-streamed. The rate was 25% in 2017 which is increasing by leaps and bounds every year. In 2018, 425 million people users streamed live in China. By 2021 its gonna be an industry of 70.5 billion. Forrester report says that the investment in video ad content is expected to be 103 Billion by 2023.

Importance of live streaming at social media
Besides Facebook and youtube, Twitch, periscope, Instagram is the most famous live streaming platform. 80% of internet users watch live streams on Facebook. Twitch Is a social media website dedicated only for live streaming. According to twitch TV’s statistics of 2019, 660 Billion minutes were watched, one million two hundred fifty-six thousand viewers, and almost 50k live channels. The watch time of Twitch, YouTube and Facebook respectively was 2,720,020,000, 735,540,000, 197,760,000 back in 2019. (source)